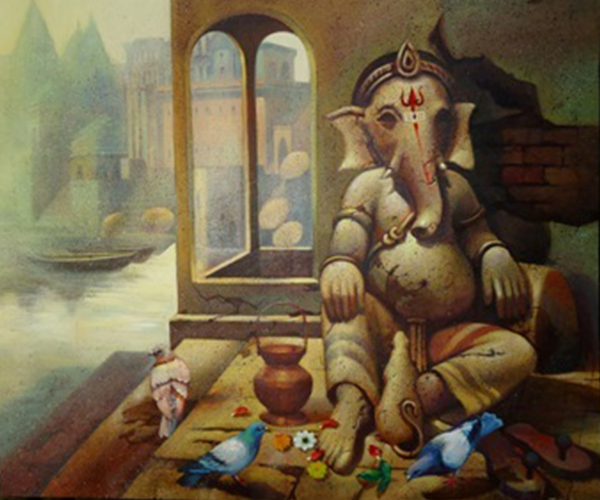 The cutest and the most loveable Indian god arrives again this year with new wave of joy, energy, enthusiasm and a lot of colours

There is a surge of excitement swelling amongst the masses with market places brimming with decorative items, sweets, clothes and not to forget Ganapati idols. Elaborate arrangements are made for lightening, decoration, mirrors and flowers. Artisans have shaped the idols with love and passion. The idols are then instilled in marquees and in houses prior to puja.

Ganesh Chaturthi or “Vinayak Chaturthi” is one of the major traditional festivals celebrated by the Hindu community. It is observed in the Hindu calendar month of Bhadrapada, starting on the Shukla Chaturthi (fourth day of the waxing moon period). Typically the day falls sometime between August and September . The festival lasts for 10 days, ending on Ananta Chaturdashi, and is traditionally celebrated as the birthday of Lord Ganesha.This year it is on 5th of September.

According to Hindu tradition, Lord Ganesha is the son of Shiva (The God of Destruction in the Hindu Holy Trinity of Creator- Preserver-Destroyer) and Parvati (Shiva’s consort). The birth of lord Ganesha is in itself a unique event in Hindu mythology. It is believed that once while Parvati was bathing, she created a human figure from some unguent and balm, gave him life and asked him to guard the door while she bathed. After a long period of meditation on Mountain Kailash (Lord Shiva’s abode), Shiva chose that very moment to drop by to see his better half, but was abruptly stopped by the man-god Parvati had posted at the door. Outraged by the cheek of this stranger, Shiva cut off his head only to discover moments later that he had killed Parvati’s son! For fear of enraging his wife, Shiva immediately dispatched his Ganas (attendants) to get him the head of the first living creature they could find. Well, the first living creature happened to be an elephant. As instructed, the head was chopped off and brought back to Shiva, who placed it on Parvati’s son’s body, bringing him back to life.

Ganesha is the foremost god of the Hindu pantheon. This brave guardian of the door to Parvati’s bath is beheld today as the most auspicious God of new beginnings. The following are some of the common Names of Lord Ganesha: Dhoomraketu, Sumukha, Ekadantha, Gajakarnaka, Lambodara, Vignaraja, Ganadhyaksha, Phalachandra, Gajanana, Vinayaka, Vakratunda, Siddhivinayaka, Surpakarna, Heramba, Skandapurvaja, Kapila and Vigneshwara. He is also known by many as Maha-Ganapathi. There is an interesting story related to each of his names. Basically these mythological stories were created to instill good virtues and discipline in human beings so each name has a moral meaning behind it.

Lord Ganesha is an embodiment of wisdom and bliss. He is the Lord of Brahmacharins. He is foremost amongst the celibates. He has as his vehicle a small mouse. He is the presiding Deity of the Muladhara Chakra, the psychic centre in the body in which the Kundalini Shakti resides. He is the Lord who removes all obstacles on the path of the spiritual aspirant, and bestows upon him worldly as well as spiritual success. Hence, he is called “ Vigna Vinayaka “. He is the Lord of harmony and peace.

Lord Ganesha represents Om or the Pranava, which is the chief Mantra among the Hindus. Nothing can be done without uttering it. This explains the practice of invoking Ganesha before beginning any rite or undertaking any project. His two feet represent the power of knowledge and the power of action. The elephant head is significant in that it is the only figure in nature that has the form of the symbol for Om. The significance of riding on a mouse is the complete conquest over egoism. The holding of the ankusha represents his rulership of the world. It is the emblem of divine Royalty.